This is a follow up question to The MVC pattern and SWING. I am trying to implement the MVC pattern in an existing piece of code. The existing code creates a JFrame which acts as both the view and the controller. The JFrame has a table, and the table's model is an adapter to a custom data model. Whenever the user performs an action, the model would be updated by doing something like the following:

I've tried to visualise how it currently works, but I've also visualised how I imagine the relationships with the future controller and model should be. 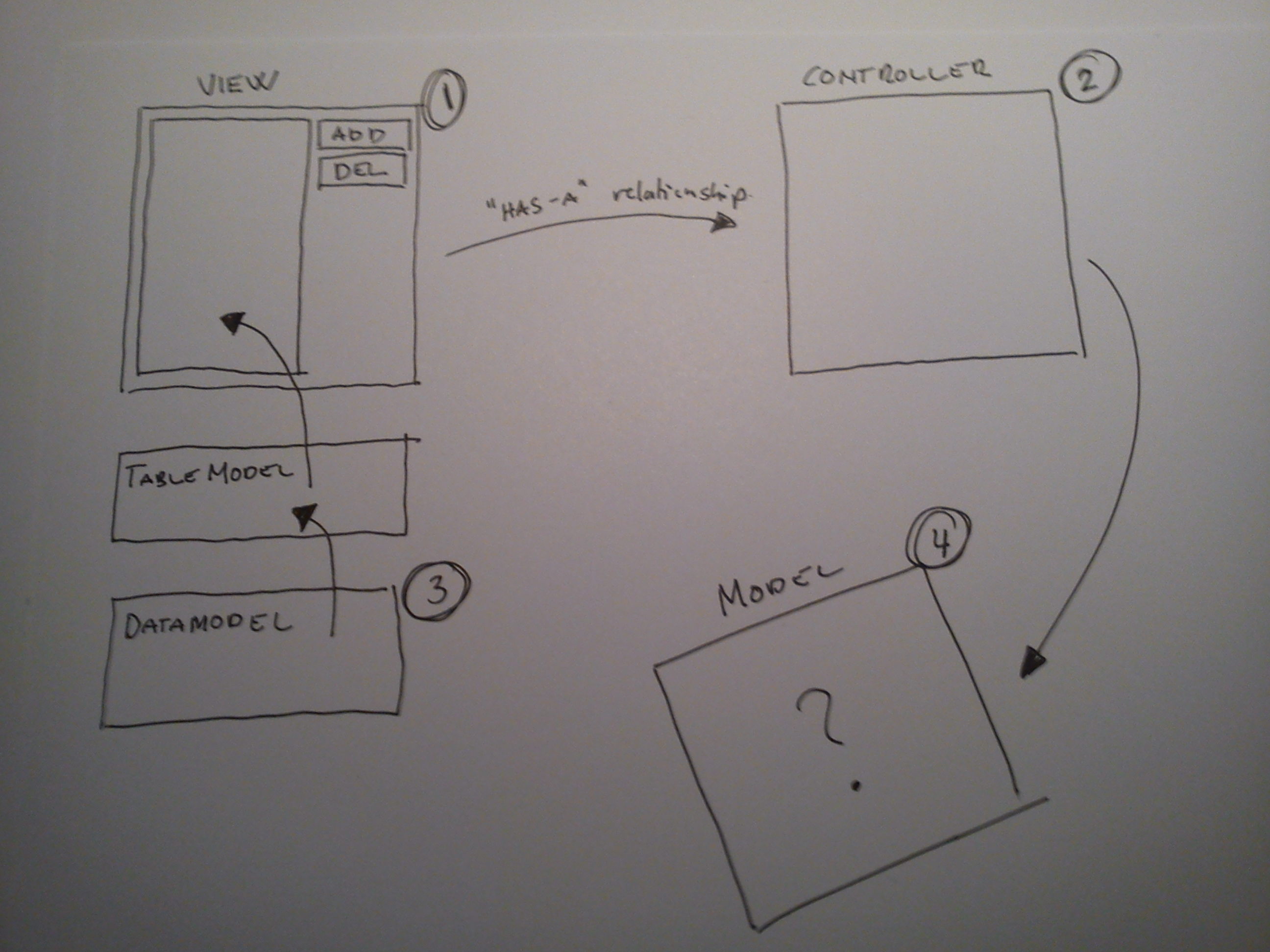 Now, my question is simply whether I can continue using the model as it is now? Could I implement the following and still "adhere" to the MVC pattern?

If any other components in the view displays data from the table, then this could be solved by registering listeners on the JTable's table model.

I've been thinking about the existing code in light of the MVC pattern, and I've redrawn the relationships a little. The point is that the controller is the behaviour of the view, thus the controller updates the model when users do stuff, and the view listens for changes in the model. However, nothing in the MVC pattern stops the view from listening to the model through a tablemodel - right? 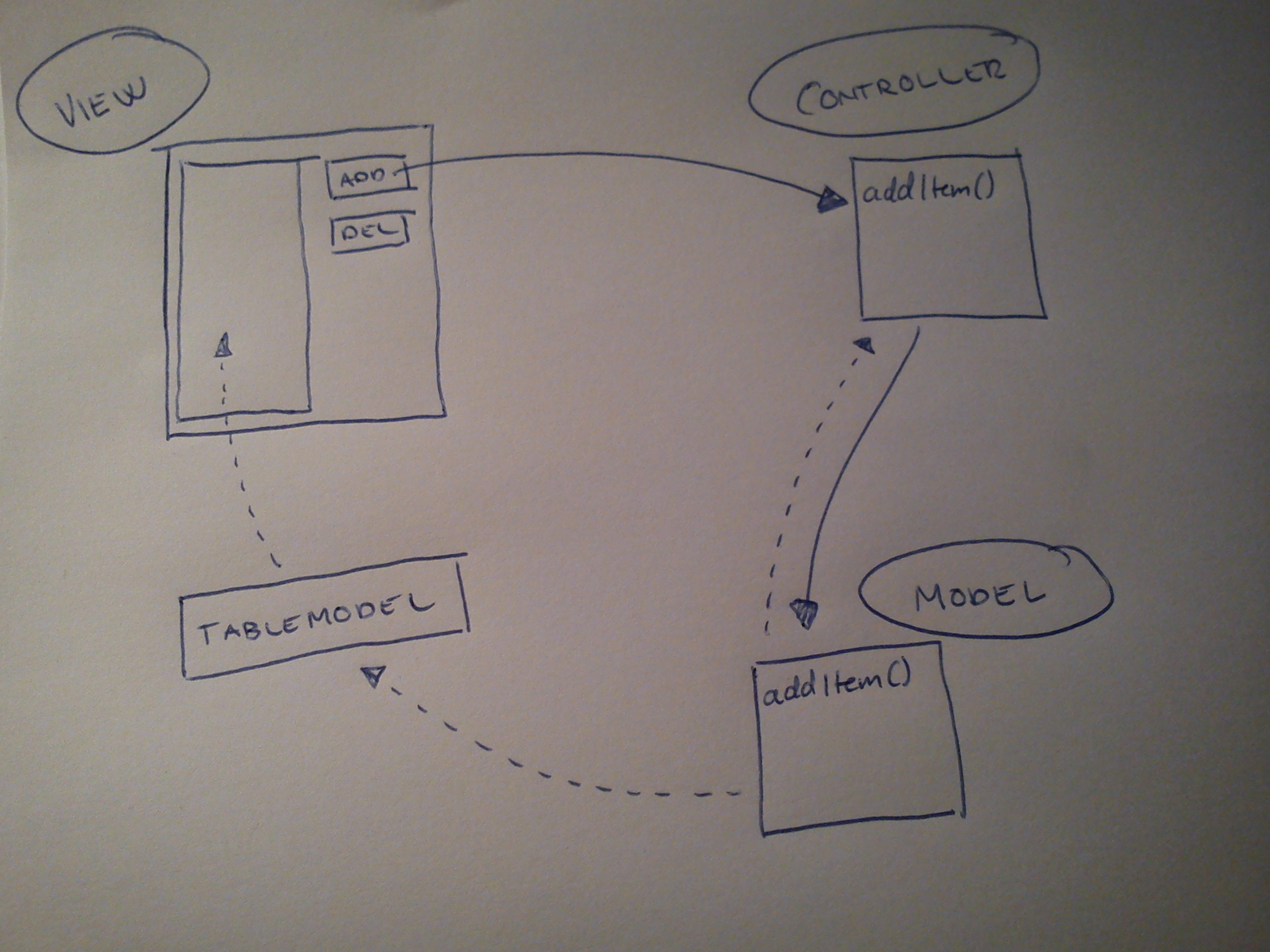 Now, the user clicks the add button. The view notifies the controller that the add button has been clicked, and the controller takes care of creating a new item by invoking some method on the model. The view is registered as a listener on the model (through a table model) and updates its view. The controller may also be a listener on the model in case it needs to take care of disabling or locking fields. Have I not achieved what the MVC is all about; separation of concerns? As far as I can see, I've even introduced the adapter pattern to decouple the view even more from the model? It is late and I am tired, so that might be why it makes sense :-)

In the general sense, I would advise you the following:

That gets messy and confusing fast, alas, and the code base is already confusing due to lack of separation.

I suggest instead migrating distinct components to a clean, simple MVC design. Such a component (which is currently a view, controller, and model all mixed up together) would then be separated in a clean fashion, however you will then have the difficulty of how to handle the controller and model? As a temporary workaround, you'll be forced to designate the owner view as the controller, so the owner arguably has more responsibility. I think that this is a suitable workaround, because you will eventually separate more and more components into an MVC design, and the views that are also controllers will eventually become refactored as well.

Be careful to ensure that the application is still working at the end of every 'step 4' above, otherwise, you'll find yourself in a mess that just gets longer and longer to fix. (Even if the end result is nice and clean, you may have missed your deadline).

Keep in mind that it may be difficult to extract the 'model' from the code at first - the controllers and views will be easiest to separate, but eventually, the models will become easier to separate as well. Whenever you manage to extract a model, write unit tests that test that model in isolation.

The presence of a well written suite of unit tests will help ensure that the application continues to have well-defined separation of concerns. (If concerns are not separated, then it becomes very hard to unit test), so the unit testing approach serves as a motivator.

I hope that makes sense.