I'm having a problem where my (simple) iOS app builds fine, says running but on the simulator I just get a blank screen. In xCode, it still says "Running XXXX on iPhone 5.0 Simulator" but also give a "Thread 1: signal SIGABRT";

There are no readable errors in the bottom window, just:

It has been absolutely fine until now. I had the problem after trying to swap out a few images and their @2x versions for ones that I'd slightly tweaked.

I've done a clean and I have cleaned the build folder. I have also emptied the DerivedData folder and tried rebooting. I've tried to add breakpoints in my AppDelegate in the didFinishLaunchingWithOptions method, but it seems to never reach them.

Pretty much run out of things I can think of to try. 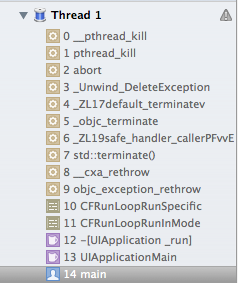 from @implementation AppDelegate, it loads fine albeit with a blank screen because I guess the window is not loading.

here you can see "Executables" set here "yourappname.app" and it will start working quite fine

Extending on Ashar's answer (as it worked for me). 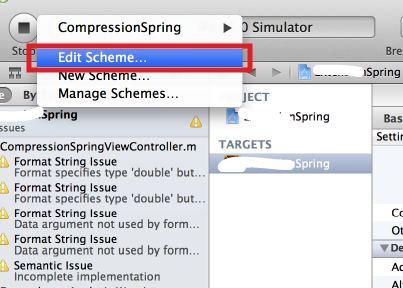 This fixed the issue for me. Hope it helps.

Have you already reset the Simulator?

Why don't you make an empty project, check if it runs, and then copy your classes in your new project? It will probably work

Line 10 is throwing an exception. It would help a lot if you can figure out what is the specific exception, which you might be able to do by examining the state at line 9.

However, seeing how early in the app startup this is happening, my guess would be that you have messed up your app resources - either you have changed the name of a required resource, or the resource is in the wrong format and the runtime doesn't know how to deal with it.

Since you mentioned you've modified some image, I'd venture to guess that the app you used to tweak it produced a different format of the image. I would try replacing the images back with the original version you know used to work, and then start swapping them with the modified one by one, until you isolated one that breaks it. At that point you can examine the difference and figure out what's wrong with it.

Maybe I'll say something stupid(probably), but according to you it happened after you replaced the images. Did you also delete them and use other names for images? I think that the problem might be that you used some image that is now missing.

It was just a random guess

I ran into this one after upgrading to XCode 7.2. In my case, the solution was to manually delete the build folder and restart my computer. I'm sure this is not a universal solution, so YYMV.